That, unfortunately, is the worst case scenario. Freshly interim levees are built; elevated to 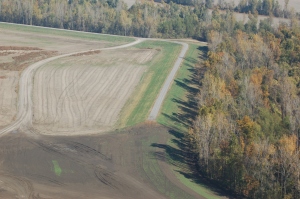 Beginning of breach at Upper Crevasse...

In essence, given due and clear warning that flooding is anticipated and if one reads between the lines just a bit the flood fight will be addressed by all means necessary including using innovative materials to bring the breach up to 55′.

Trouble is. That’s about 7,500 feet of levee to implement these measures. And, it will be on top of a newly formed crown. Not, the almost century long levee that withstood the initial blasts with fury refusing to yield the length anticipated in the breaches and with one crevasse completely averse to operating as designed.

The serious matter is another rush of wather thru these fields would be – and its hard to say again – but a Groundhog Day of devastation; with weeks and months of cleanup for anxious farmers; workers and citizens. As the community is just now getting back to some sense of normalcy but – and this is just my observation – still not back to prior activation days…

In control of the situation, as was the case in late April and early May, is the epic rainfall training in all the wrong places right up the Ohio River Valley and thru the Tennessee and Cumberland Valley.  Keep an eye of the Dams and river levels on those tributaries of the Ohio and you will get a preview of what kind of water will be flowing thru – well, hopefully – around Mississippi and New Madrid County.

I have placed a call this evening to James Pogue, PR man for the USACE and hope to get some additional information I will share once gathered.

No one wants to experience what is still fresh in the mind of the citizenry. Not one.