Trailing by as many as 14-points late in the third quarter, the East Prairie Eagles rallied to tie the score at 51 with four minutes left to play in regulation. Though, Puxico (3-1) steadied and pulled away for the six-point 63-57 victory in the consolation championship of the Bernie Invitational, the Eagles displayed the reason(s) they will be a good watch in person this season.

All worth the price of admission.

Senior Dalton Golightly, who also enjoyed his birthday today, said in a message via Facebook;

“Thoughts on game.   Disappointed   I know the game was close but We didn’t play how we 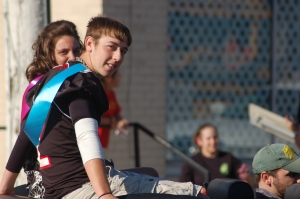 can.  I had high expectations for this game and it hurts to lose like that.  We will learn from This and come back stronger.   I hope we grow as well as our crowd support grows.  The crowd helps us so much.    Thoughts on tourney.   I’m pleased with the tourney.  We got seeded the 8 seed which we all felt undeserving of and we came out and proved we wasn’t the worst team there.  It feels good to gain respect which I felt like we did. “

The veteran senior has had the burden of bringing the ball up the floor for basically four years for the Eagles with not a lot of help in the #2 guard position – facing a pressing defense virtually game in-game out. It’s the formula to beat them, according to area observers.

Ep took a good run at Puxico Friday night leading 12-10 at the end of the first quarter. With not a pure scorer on the team, the Eagles depend on different point sources. Senior Shawn King – whose game winner propelled Ep into tonite’s battle for some hardware – has hit double digits in all three games; P-Lat and overlooked Logan Staggs added double digits the last two nights and Devin Cook has been a pleasant addition to this year’s team. Sophomore Damien Tipler can help but could use a trim; and when thrird year coach Casey Knight brings freshman off the bench in Seth Bays and Mack Marcum, they don’t look lost on the floor.

The Indians got hot in the second quarter running to an 11-point margin 33-22. Puxico, for those that may not know, is a historic small school basketball legend from the 1950’s. Google it. As I stated in an earlier post, friend and author Matt Chaney documented the greatness and innovation of coach Arnold Ryan in a standard-setting look at the program. Google that as well, it’s worth it.

Back to the game, the Eagles fell behind by 13 in the opening possession of the second half and trailed by as many as 14-points before defensive pressure allowed the Eagles to rally back steadily reducing the deficit to put themselves in a position to make a run at the end of the game for the win. They came up just short.

Down by five entering the fourth period, the Eagles would remarkably tie the score at 51 all with just over four minutes left to play. But could never get over the hump. It was couple of missed crucial free throw opportunities that kep the Eagles was taking the lead getting it to 57-55, but it just wasn’t meant to be.

This team will win more games. And, this team will win more respect and they gain confidence with the competitiveness. I must say, I look forward to going and watch them play this season. I couldn’t say that in the not so recent past. HATS OFF to Coach Knight and the players for  fighting the good fight the right way.

It’s not all about wins and losses; its how you play the game sometimes.